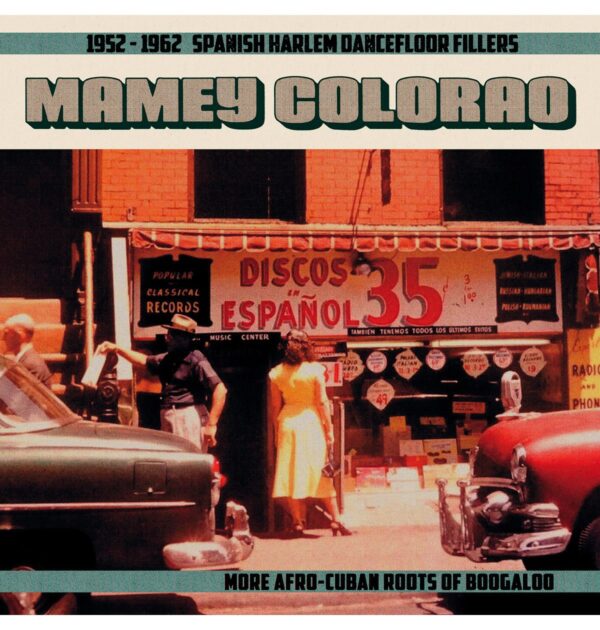 In this series we bring in some of the names of the Latin Bands based in New York between the 40’s and early 60’s and other recordings done in Cuba by Orquestas or Conjuntos likes Félix Chappottín, José Curbelo, La Playa Sextet that were a big influence for the Latinos in New York. We are talking about musicians of the stature of Eddie Palmieri, Mongo Santamaría, Noro Morales, Francisco Aguabella, Cal Tjader or Machito. “Mamey Colorao”, a well known composition by Peruchin Justíz is the Album title of 3rd volume from “AfroCuban Roots of Boogaloo” compilation series of “Zombie Club” by Grosso Records, performed by Tito Puente and later covered on a more electric version by “Ocho”.

Side A opens out a variety of more traditional Cuban numbers such as “No tiene telaraña” by José Curbelo’s Orquesta, ”El Baile Suavito” a heavy duty tune performed by Orquesta Aragón and a very well known cha-cha-chá “Rico Vacilón” written by Rosendo Ruíz Quevedo on the inimitable voice of Machito and his Afrocubans. “Garbage Man’s Chachachá (La Basura)” by La Playa Sextet highlights an electric guitar sound that anticipates the fusion of the traditional and the new sounds that would lead into the “Boogaloo” and “Salsa”. A couple of montunos round off the A side, “Quimbombó” from Félix Chappotín Orchestra with the legendary Miguelito Cuní and “La Bolita” with a double entendre of Bimbi and his Trío Oriental.

Noro Morales opens the B side with ”Vitamina” a traditional mambo followed by “Palo Mayombe” a pachanga rhythm with the distinctive
afro-sound of Mongo Santamaria. “El Gavilán” on a exquisite version performed by Eddie Palmieri on piano and an outstanding brass section
that would years later identify the Fania All Star’s sound. The last three tracks bring about a turning point on the concept of the album: “Wachi
Wara” by Dizzie Gillespie on a Latin Jazz vein performed by the always modern and elegant Cal Tjader, “Titoro” by Tito Puente on a version with
a brazilian vibe at times interpreted by vibraphonist Bobby Montez and concluding, Francisco Aguabella with “Shirley’s Guaguanco”, a jazzy
tune with a traditional guaguancó rhythm and sound on the congas and bongo with a final Coro reminiscent of the very Cuban “rumba de solar